The Deputy Prime Minister Michael McCormack joined representatives from the Australian Rail Track Corporation (ARTC) and LIBERTY Steel in Parkes this week to mark the completion of the first $20 million order from LIBERTY Primary Steel’s Whyalla steelworks to the Inland Rail project.

This week's  delivery of a milestone $20 million steel order to the Inland Rail project coincides with work ramping up on the construction of the North-West Connection, 5.3km of  new rail that will link the existing national interstate railway network to Inland Rail.

“The construction underway and supply of steel rail to the Inland Rail project is an example of how a project – that has been talked about for generations – will benefit all Australians for the next 100 years,” Richard said. 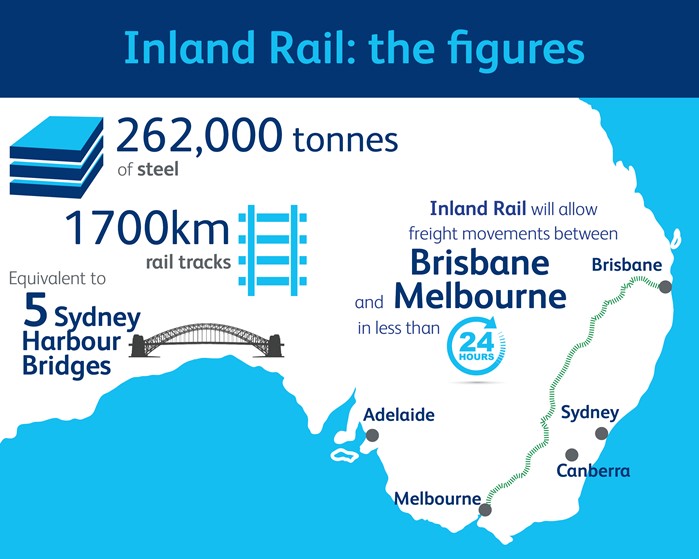 LIBERTY Primary Steel has been steadily manufacturing approximately 14,000 tonnes of steel rail for transportation to Parkes since being awarded the $20 million contract in December 2017.

LIBERTY Primary Steel Chief Operating Officer Theuns Victor  said the company was proud  to contribute to projects of the scale and importance of Inland Rail.

“It is exciting to see this ‘nation-building’ project being built with Australian steel and benefitting regional communities right across Australia, including Whyalla.

“Our Whyalla steelworks has forged a close relationship with ARTC over many years, and we are continuing to explore opportunities for the possible supply of our high-quality rail into future stages of this vital infrastructure project.”

Richard Wankmuller said with construction of Inland Rail now ramping up, benefits and jobs are flowing to regional Australia. Other major contracts have been awarded, including concrete sleepers being fabricated in the NSW Southern Highlands, ballast coming from Parkes and culverts produced in Tamworth.

“We are excited to be partnering with regional business, boosting jobs, creating vital infrastructure for Australia’s future. With construction accelerating in the Central West, it’s great to see 60 workers from INLink already working on the Parkes to Narromine section,” Richard said.

“More than $300 million is being spent here in Parkes, boosting spending at the local shops and supporting the local school or café or businesses such as the local auto electrician.”

Rail construction works to upgrade the existing infrastructure between Parkes and Narromine to Inland Rail standard will continue into 2020 to enable preparation for heavier, longer freight trains to travel between Melbourne and Brisbane, Sydney, Adelaide and Perth.

Inland Rail will offer a road competitive service that will reduce transit times for freight movements between Melbourne and Brisbane by rail to less than 24 hours, with reliability, freight availability and pricing to meet growing customer needs.

Clear Search View all for "Fabrication"

Our name is changing: